by admin in Corporate

On May 2, 2018, the EU initiative “Mayors for Economic Growth” was held in Telavi with the Kakheti Regional Administration. The meeting was held with the mayors of Kakheti municipalities. The eight municipalities of Kakheti are members of the Club for “Mayors Economic Growth”. They work together with local businesses and civil society on the development of local economy and job creation.
The event was opened by the state governor of Kakheti Irakli Kadagishvili, who spoke about the importance of supporting mayors and municipalities at local level and sustainable local economic development.

The essence of the project was introduced to the audience by Peter Corsby, Head of the Mayors for Economic Growth Group, Julia Dzinagilo, M4EG Secretariat, Regional Coordinator and Zviad Archuadze, Project Coordinator for Azerbaijan and Georgia.
Malkhaz Chrelashvili, executive director of the Kakheti Regional Development Agency, presented a presentation on the economic potential of Kakheti region.
At the event, the “Mayors for Economic Growth” club members were awarded certificates of membership of the club.

Special attention was paid to “Kakheti Regional development Agency” (KRDA) for participation in this project and also of its development as a coordinated structure of regional projects.
High officials of Kakheti Regional Administration and mayors of Kakheti municipalities took part in the event as well as Kakheti NGOs and business sector representatives. 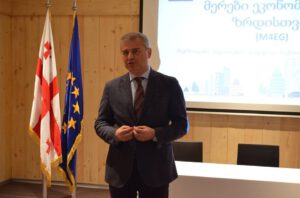 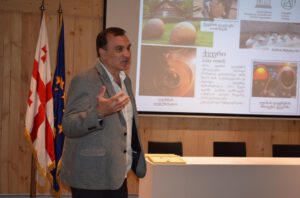